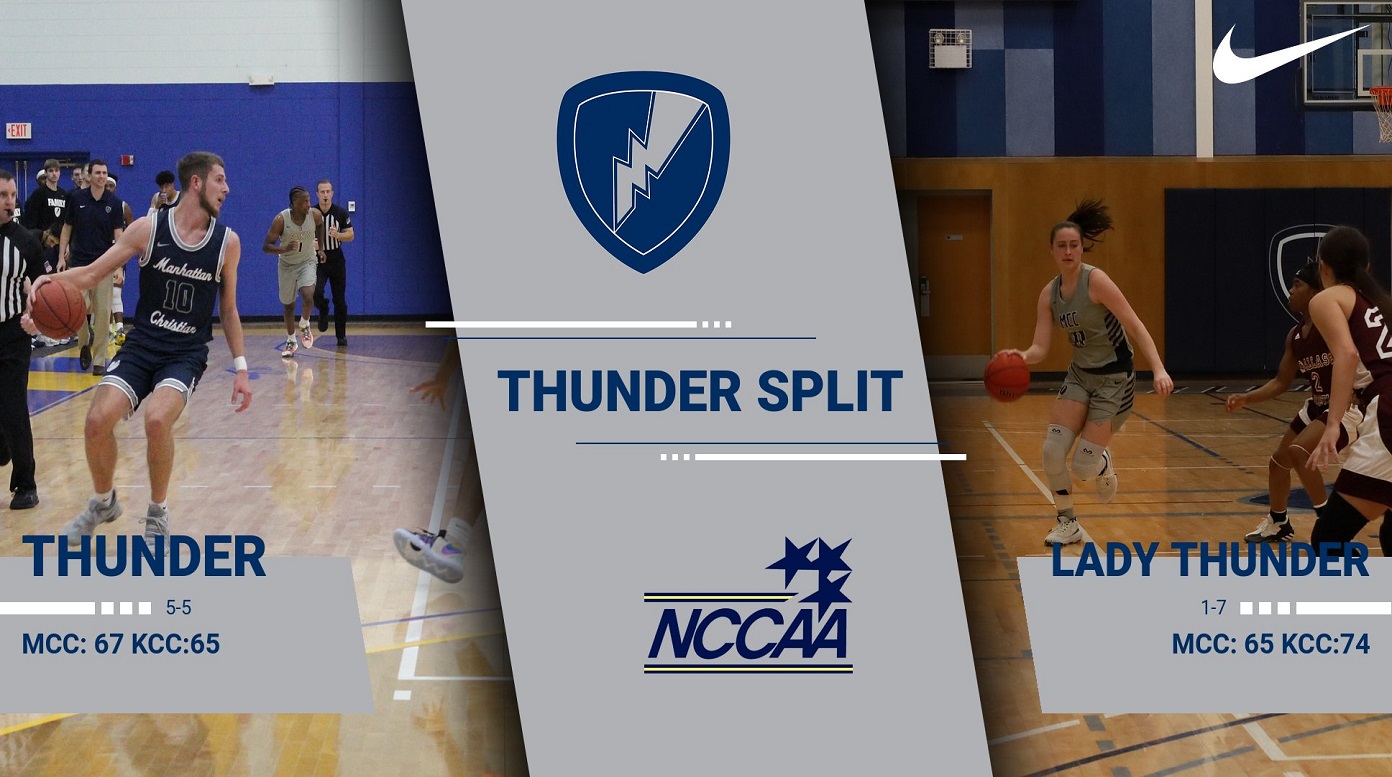 After a great showing against two top NCCAA ranked Southwest Region teams last week, the Lady Thunder were in high spirits heading into their last game before break vs Kansas Christian College. From the start it was a slow-paced start for both teams, struggling to get the ball into the hoop. MCC would eventually take a 7-point lead with 5:00 minutes to play in the first quarter. Plagued with foul trouble for a huge chuck of the game, KCC would take a 41-29 lead into half.

The second half saw a different MCC squad, outscoring the Lady Falcons 36-33 but with the foul trouble, the defense just didn’t have the fight or scrappiness like normal. A late game surge for Manhattan just wasn’t enough, KCC went on to win 74-65.

“The improvement it there, I see and so do the fans. There are moments of greatness, and we just need to continue to build off of those, learn and grow. We now head into a decently long break, which is going to be good for everyone. We can recharge, take care of a few injuries and come back ready to get into conference play,” head coach Mindy Eckert commented.

MCC was led by three sophomores when it came to scoring, Kayleigh Mannering finished with 30 points, Roni Harris added 21 points and Karlee Wahlmeier chipped in 8.  Manhattan Christian (1-7) will be back on the floor December 31 with an exhibition game with Baker University.

On the Men’s side, Manhattan Christian jumped out to an early 11-4 lead before Kansas Christian called a timeout. MCC would continue to stretch their lead to 14 points, 21-7. But KCC would fight back with a run of their own, tying the game 21 all with under 10:00 minutes to play. A back-and-forth battle would see the Thunder down 36-34 going into halftime.

The Falcons would only extend their lead to 4 early in the second half before the Thunder would storm back taking the lead. A game that saw 7 ties and 4 lead changes proved much entertainment for the fans, especially in the final seconds. With 1.6 seconds left, the Falcons would tie the game 65-65. No timeouts left, MCC would have to go the length of the floor to try and win the game. Jordan White would inbound it with a 90 feet football throw to senior Jordan Marshall who would easily lay it in to win the game 67-65.

Marshall finished the game with a double-double, 30 points and 12 rebounds. He was joined in scoring by White, 10 points and 5 assist. Up next for the Thunder (5-5) will be a home match up Friday, December 10 with Doane University, 7:30pm tip-off.