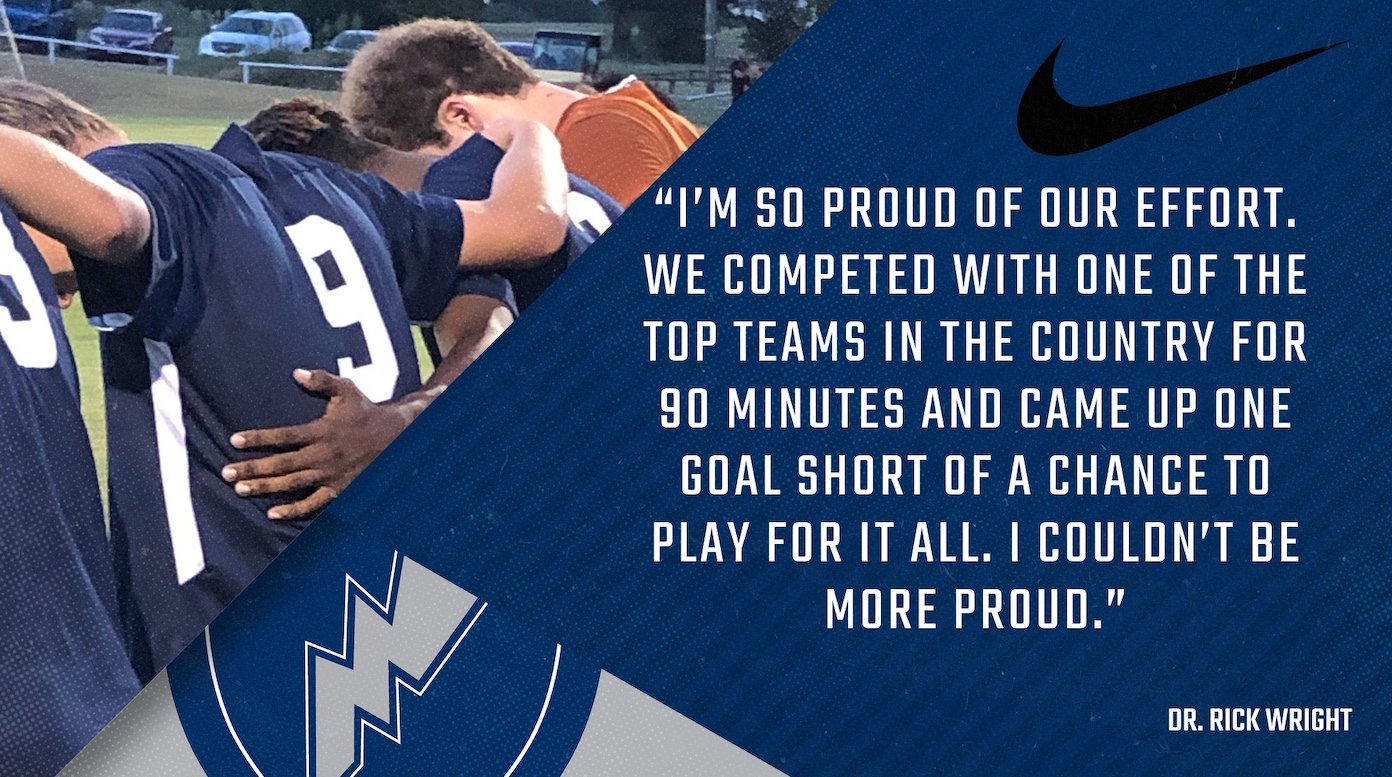 In the sunshine and the rain the men's soccer team competed at the NCCAA DII National Championships this week in Kissimmee, FL. Game one saw the Thunder take on the #5 seed Bulldogs from Boyce College on Wednesday. Right from the jump the Thunder were on the attack as they mounted the offensive drive. Early attempts to score weren't realized as MCC sailed a couple of attempts and saw one go right off the cross bar. In the 35' minute junior, Corey Bates, was finally able to punch one home to give the Thunder a 1-0 lead that they would take into halftime. MCC would send another one home early in the second half off of a set corner piece as conference MVP, Caden Miller, was able to knock in a header off the service from junior, Ethan Hill. The two goals would be enough as senior, Kord Pearson, kept a clean sheet in goal to give the Thunder a 2-0 win.

With the win MCC matched #1 Bob Jones with a 1-0 record in pool play setting up a Thursday match with the Bruins that would send the winner to the National Championship match. MCC came into the game as underdogs having not advanced to the title game since 2008, the last time they won the championship. The game was played in the mud and rain and Bob Jones made sure to flex their muscle early as Victor Oladipo was able to squeeze one of his three goals in the third minute of play. The Thunder would remain tough and find pay dirt in the 26' off of a set assist from Ethan Hill to Adam Lee to tie up the ball game. The game would remain tied at one until Oladipo scored late in the half to give the Bruins a 2-1 lead at the break.

Out of the break MCC would again score off of a set piece from 25 yards out as Cristian Faz would send one into the box where freshman, Matthew Young, would find the back of the net to tie the game at 2-2. The joy would be short lived as Oladipo would find the back of the net one last time only a minute and seventeen seconds later to give Bob Jones the 3-2 lead. MCC would mount a couple more drives, but came up short as BJU would win the game and advance to the championship.

"I'm so proud of our effort," stated Head Coach Dr. Rick Wright, "We competed with one of the best teams in the country for 90 minutes and came up one goal short of a chance to play for it all. I couldn't be more proud."

With the loss the Thunder soccer season comes to an end at 14-7 after winning both the conference regular season and tournament championship. MCC has been ranked in the top 10 all year long and will undoubtedly finish the final poll there as well. This team has the chance to return a majority of their scoring along with a backline that played well as freshmen and sophomores all season long. The future is bright for the men on the pitch.