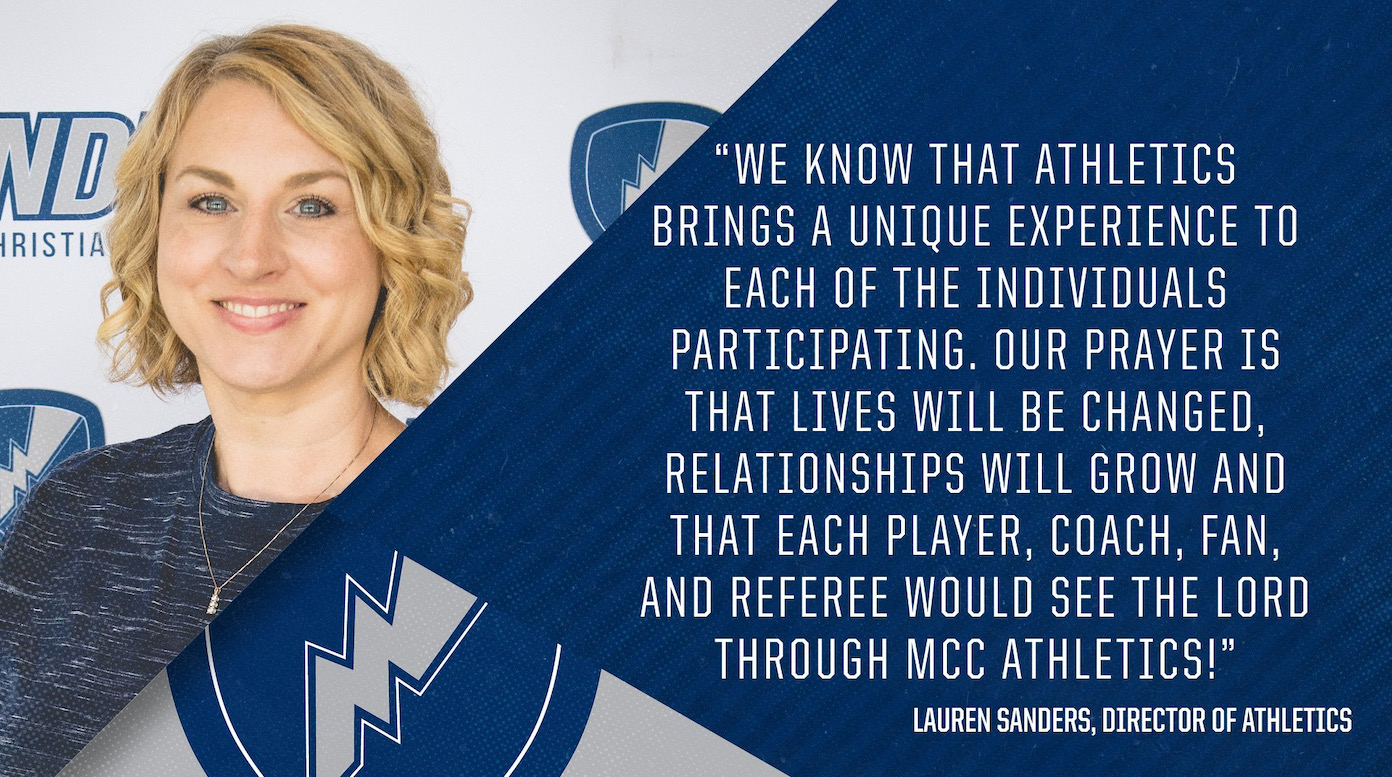 MCC Athletics would like to introduce a familiar face to the Thunder family! Lauren Sanders has taken over the role of Director of Athletics. Previous athletic director, Jordan Strom, has moved into an administration role on campus as the Vice President for Student Life. While this position is new for Sanders, she is not new to MCC Athletics. Coach Sanders has been the volleyball coach for the past 17 years, working in several other departments on MCC’s campus, with the last 12 years as the Director of Dining Services.

Coach Sanders wanted to take this opportunity to update Thunder fans on the exciting progress of MCC Athletics and what’s in store for this upcoming year.

I am thrilled to be joining the Athletic department staff full time and to take over as the new Athletic Director. I am so grateful to Coach Strom for his leadership and example over the past few years and look forward to continuing the work that he started.

Here is a quick update on each of our programs:

After the retirement of Coach Rick Wright, we were able to hire Coach Joe Lopez to take over our men’s program. We are so excited about Coach Lopez’s enthusiasm to take the helm of the men’s team! We expect Thunder Soccer to be refreshed and create new traditions while continuing to build on the past tradition of excellence.

After a one-year hiatus, we are thrilled to return our women’s soccer program to the pitch. Coach Lopez has also been tasked to breathe new life into the women’s program. He hit the ground running when he got to Manhattan and has filled a team with former players and new recruits. We could not be more excited to give our women’s soccer athletes this opportunity to be on the field once again in a Thunder jersey! The team will play a 10-game season and will look forward to competing in a strong Southwest region!

Coach Sanders returns to lead the Thunder Volleyball program for her 18th year. The team had tremendous success in 2021, finishing in the Final Four.  This year the team looks to build on that success, returning 6 players from the 2022 squad and adding several new talented athletes as well. The team will be ready to compete regionally and nationally! Returning seniors Elise Corbett, Brenna McNellis, both NCCAA All-Americans and senior middle hitter Grace Walker will bring experience and leadership to the team. It will be an exciting season to see what this team can accomplish!

Coach Mindy Eckert will continue to lead the cross-country team. This season we will have one runner on the women’s side, Kate McGee. McGee is a returning runner and will participate in 5 meets looking to qualify for the NCCAA National Championship.

Coach Eckert will return for her third season as the women’s basketball coach. Each of Eckert’s last two season have seen tremendous growth in the players on the court, while small in numbers the talent is there! With a few new recruits to add to the returning 3 players, the women will take the court later this year!

Coach Strom will return for his fifth season leading the Thunder Men’s Basketball team. Returning 12 players from the 2022 squad and adding 5 new players, the team is reloaded and ready to compete in the deep Southwest Region for another shot at the National Tournament. Last season, the team finished in third place at the National Tournament. Coach Strom will look to returning seniors Ferdinand Handy, Jackson Nicodemus, Taymont Lindsay and Jordan White for leadership entering this next season.  We can’t wait to watch some Thunder hoops later this fall!

E-Sports returns as a club team for MCC. This past year we were able to convert and dedicate a space just for E-sports! Last semester we hosted several game nights for interested students. We look to continue building this program and hope to participate in several off-campus tournaments as well. IT Director, JT VanGilder has been a tremendous help in getting this program rolling.

The 2022-2023 year is poised to be an exciting year of competition! While we look forward to all of the accomplishments, wins, losses, awards and team experiences, we are most looking forward to seeing how God will work through each of these teams. We know that athletics brings a unique experience to each of the individuals that participate. Our prayer as an athletic department is that lives would be changed, relationships will grow and that each player, coach, fan, and referee would see the Lord through MCC Athletics!